Deep in the jungle of a remote island in the Pacific lives a new breed of mutant snake. Dr. Andrea Swanson and her research assistant Jake have been studying the species in a top secret military experiment to develop the ultimate anti-toxin. But when tensions rise with the Chinese military, Admiral Bradley Wallace quickly evacuates the island. The only way home is an old, decommissioned submarine on its final voyage to its new home in Taiwan. Wallace decides to put Lt. Commander James O’Neill at the helm, a hardened pro facing forced retirement… and he is less than pleased to be “babysitting” his two new guests. But they’re not alone. Andrea was ordered to bring some of the experimental snakes back to the mainland – and worse, Jake has smuggled some of the deadlier mutated snakes on board, including a giant diamondback. When a Chinese vessel attacks the sub, the vicious creatures are released from their secure containers and begin to stalk the crew members one by one. Trapped two …
>> 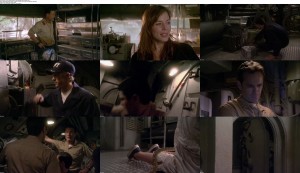